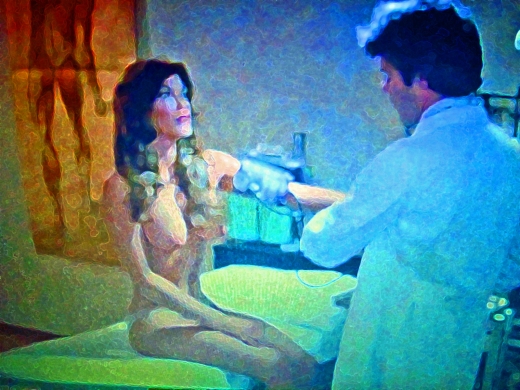 A preamble in the past — the outsider wants to give the heroine his heart valentine, but she finds him too odd, and prefers the fast track talent of the popular swain. Sadly the latter is racked, like a coat, presaging, no doubt, the multiple homicides of the future. But let’s not feel too superior, aren’t we, after all, that boy at the illuminated window, buying and presenting our ticket like a billet-doux, knowing we’ll never get closer to the avatar of our desire than the first row, filled with an obscure envy for the character who actually stands next to her?

Some credit, however, must be given to the nascent killer for foresight. He knew what we in audience couldn’t have without the aid of the marquee — that the nondescript little girl would blossom into the lush orchard of womanhood named Barbi Benton who appears quite full grown post titles.

Besides extreme physical maturity, she’s also acquired an ex-husband, a daughter and a boyfriend committed to driving her to her goal, the hospital, because in America you need a clean bill check up to promote yourself in business. As she strides the maze of hallways, looking for the proof of her health, it’s as if that confounding body of hers is already contagious, transforming all the doctors into bad actors and the patient and audience into voyeurs, infected by a feverish desire to see more of it.  Eventually she’s placed in quarantine, where we can all gain the privilege of examining her minutely, awed yet petrified, as if she had twin medusa heads under her blouse, flanking her cavernous cleavage.

This painstaking prurient inspection takes place as we, like the fellow playing doctor, take in (or as much as an R rating allows) every inch of Barbi’s near nudity. She seems extremely healthy — the malignancy, such as it is, is lies in us. But it’s facile to condemn, for the picture would collapse if this revelation of the flesh wasn’t there, for sex is one leg of this critter as surely as violence is the other, and, indeed, slashing has already commenced, and Barbi’s innocence of it will soon come to an end. Let’s just say that she learns the secret to getting ahead, but the head belongs to her boyfriend, for the monster who was outside in the prologue is now in the center of the hospital maze, and quite bullish about opening her heart to him. Maybe this time she’ll get the point.

Of course, being the heroine, she’s pluckier than all that, and send this dispatch to hell. And we, the passive viewers, have seen it all, or at least most of it, anyway, still in thrall to the body itself; its bloody effusions and soft appurtenances, the strange contagions of blood and skin. But as the nurse says to the perverted patient peeping at Barbi, it’s time to go back to our ward.