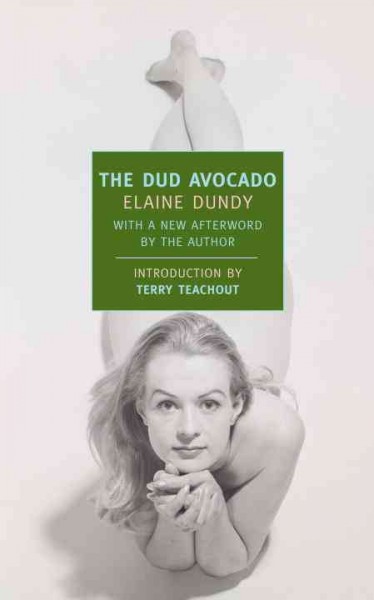 Recently a woman named Tracy Tynan published a memoir (which — full disclosure — I haven’t read), that seems to center, like so many these days, on how awful mommy and daddy were.

Her father was that once famous enfant terrible and then just plain terrible literary critic Kenneth Tynan, while her mother, Elaine Dundy, is almost always described as the author of the cult classic The Dud Avocado. Now I don’t know about you, but whenever I hear the phrase “cult classic” I can’t control myself — like some Manson girl looking into Charlie’s hypnotic eyes I immediately want to join that cult — and I’m quite happy I did.

The Dud Avocado is, first of all, a very funny book, principly because of the honest, extremely witty voice of the narrator, Sally Jay Gorce, who is always willing to share both her perceptive, acerbic opinions and her baffled ignorance and regret. It’s the story of a post-collegiate American woman who from a very early age has tried to run away from the stifling conformity of her home, and finally makes it to the bohemia freedom of late fifties Paris. There’s definitely a picaresque aspect to it as she careens from adventure to misadventure among fellow expats and various representatives of the Old World. The novel it most reminded me of was actually The Bell Jar, with comedy less black and no suicide or insanity. That’s not to say that there are no darker shades in the book, and indeed at the end some pretty shady plot mechanisms grind rather grimly, but it concludes on a rather improbably upbeat note, so I suppose all things considered, you’d have to call it a comedy.

But what I most liked about it was the endless stream of memorable lines that Dundy puts in Sally Jay’s mouth. I was so busy stuffing them into my quote bag that I was hardly able to turn the pages.

A rowdy bunch on the whole, they were most of them so violently individualistic as to be practically interchangeable.

It’s amazing how right you can sometimes be about a person you don’t know; it’s only the people you do know who confuse you.

But what the hell, I told myself, it wasn’t as if I were one of them or even competing with them, for heaven’s sake, I was merely a disinterested spectator at the Banquet of Life. The scientist dropping into the zoo at feeding time. That is what I told myself.

That’s the story of my life. Someone’s behavior strikes me as a bit odd and the next thing I know all hell breaks loose.

On the whole they were a disreputable bunch of revelers, working on the assumption that every day was their birthday or some such equally weak assumption, and their virtues were largely negative.

Sometimes the only thing in the world that doesn’t bore me is listening to bores.

I always expect people to behave much better than I do. When they actually behave worse, I am frankly incredulous.

I mean the question actors most often get asked is how they can bear saying the same things over and over again night after night, but God knows the answer to that is, don’t we all anyway, might as well get paid for it.

memory documentation and manipulation
View all posts by ubu507 →
This entry was posted in Books, New York Review Books. Bookmark the permalink.