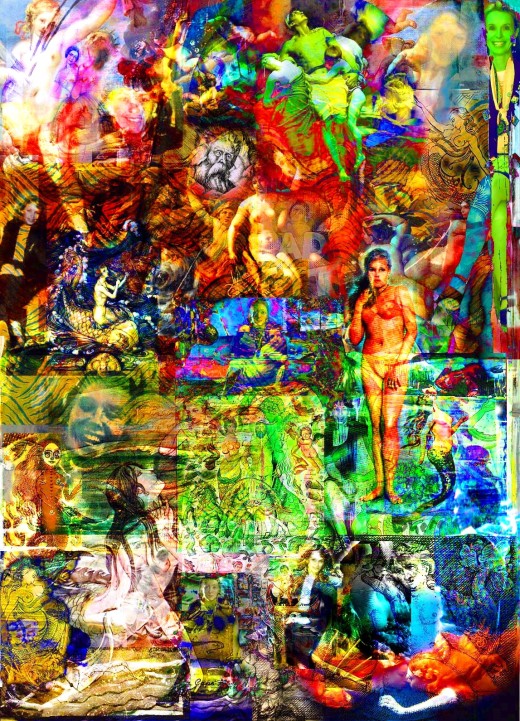 Through the big plate glass window of the cafeteria I see Virginia and Pam at a patio table outside. I break off my conversation, slip through the crowd, and go out the door and around the corner to them.

Hey, I say, sitting next to Virginia. Just like old times, huh?

God forbid, Virginia mutters and Pam laughs, but we manage to initiate an amiable enough conversation.

What’s this? I point to some flecks of paint on Virginia’s hands. Redecorating?

Yeah, she says, brushing at them to no effect. My bedroom.

I bend closer. What color is that, anyway?

Pam’s old boyfriend, one of the Hammerheads, called that for the flattops they’d affect during football season, slides next to her and they resume one of their many long standing arguments.

Virginia turns to meet my eyes for the first time. I have something for you.

Really? What is it?

Hold out your hand, she says and when I do she drops something soft in it. There you go.

What? It’s a small piece of brown fabric, curling over in my palm. What is this supposed to be?

It’s your soul. I want you to have it back.

I smooth it out – silk on one side and cheap, striped canvas on the other. I try to play along. No way, Virginia.  I gave it to you of my own free will. You know how crazy I was about you.

What the hell are you talking about? I always…

As my voice rises, I realize that the Hammerhead’s gone and Pam’s staring at us. You guys O.K.?

Yeah, fine. Virginia stands up and puts on her sunglasses. Let’s just get out of here.

I hear there’s some kind of performance down at the Union, I say. It sounds like it might be fun.

We head over that way, but as we pass the Commons there’s a tall guy with a guitar standing in the square, a crowd milling in front of him.

Virginia just leans over to give me a kiss on the cheek, then follows Pam. I stand there as they start talking to the guy, all smiles, and take a couple of bottles of water from the cooler at his feet. They open them and go sit on the wall as he starts singing some song about going back to California.

I just shake my head and keep going on toward the Union. Typical.

The performance is in the basement, where the lunchroom used to be. It’s been artfully staged to resemble the ocean, with billowing blue smoke, flapping green and violet sheets and rippling light effects, all edged in a black light glow.

At one end is a tableau vivant — The Triumph of Neptune and Amphitrite? –complete with Tritons, Nereids, and a trident wielding sea king,  which is finally scattered by the arrival of mankind in outrigger canoes. It’s all slightly confusing, puppets and papier-mâché boats drifting around, and no clear distinction between performers and audience, but I’m fascinated as the mythic creatures and humans coexist for a while, with sirens luring Greek heroes, and clam shell breasted mermaids splashing around hungry eyed salts, but people and their works start to predominate, Viking ships gliding toward the far horizon, Jolly Roger flying pirate ships blasting away at Union Jacked men o’war, and even a crazed pegleg Ahab, harpoon in hand, pursuing an amorphous white whale to scattered applause.

Then the tone changes, and the last trace of magic fades as huge cardboard tankers, atomic submarines, battleships and oil rigs overshadow the scene, projections of dolphins floundering helplessly in nets and vast spreading oil spills playing over the now literally torn fabric of the ocean and then disappearing themselves, leaving everything lifeless, slack and spent.

At last a disembodied, echoey voice intones And the sea gave up the dead that were in it… and there’s an explosion of white light, figures emerging from every side – soaking sailors covered in seaweed staggering out of the waves into the arms of their wives and children, tragic suicide lovers reuniting, mariners finally twisting from the tentacles of Kraken, swept away infants cradled in their mothers’ arms, Titanic and Lusitania disgorging entire deckfulls of clammy corpses, and everyone’s hysterical, sobbing and crying, and so am I, pressing that little piece of fabric, my soul, to my watery eyes.

memory documentation and manipulation
View all posts by ubu507 →
This entry was posted in art, From A hypnagogic Journal, Literature. Bookmark the permalink.